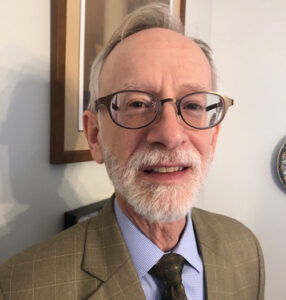 Born in Pittsburgh, Tom has lived in Jersey City “most of the time” since 1983.  He and his wife Barbara Hines have been members of Temple Beth-El since 2009.  Tom is a graduate of Brandeis University and holds a Master’s degree in Government from Cornell.

A childhood in the Steel City and a fascination with China led him to the metals business, where he was one of the first US traders to import steelmaking raw materials from China.  He started a trading company in 2003 and remains in this business to this day.

Tom and Barbara raised their daughter, Vanessa, in Jersey City; she graduated from Vassar College in 2019 and is now a pre-school teacher in Philadelphia.

After several years as a Temple Trustee, Tom became President in 2017, and has helped lead the transition to a new settled rabbi and numerous changes in the administration of the congregation.

In his spare time, Tom enjoys skiing, yoga, reading history and biographies, and playing guitar and piano.  You can spot him riding around town on his yellow bike or his silver Vespa.

Read more about how to get involved or make suggestions.