Click here to donate to our capital campaign or to fulfill an existing pledge.

In September, 2014, after two years of research, including engineering studies, alternate site explorations, discussions with several architectural firms about renovation vs replacement of the sanctuary building, and an extensive pre-campaign assessment, Temple Beth-El’s congregation voted overwhelmingly to accept the Temple Board’s recommendation to stay on its present site, renovate the sanctuary to retain its stately beauty while modernizing to offer the next generations efficiency, accessibility and flexible use of the inspiring space.

In January, 2015, the congregation kicked off its capital campaign, Kadimah! (which means “forward” in Hebrew).  Based on current design drawings and recent contractor preliminary estimates, the total project is expected to require approximately $4.5 million of which $1.2 million has been raised and used to accomplish the first phases of the work. 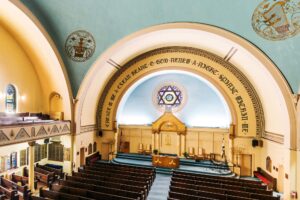 The campaign begins with pledges from our own congregation. Our target is 100% participation. As of January, 2020, the campaign has received pledges of $1.5 million and has collected over $1.3 million.

“Temple Beth-El – yesterday, today… and tomorrow. Our congregation has touched the lives and the hearts and souls of so many, while embodying the principles of Reform Judaism and a dynamic sense of community. By generously supporting the Kadimah! Campaign now, we can be assured that Beth-El will continue to be vital and meaningful – and that it will be there for all of us and for each of us – today and for future generations.” – Irwin Rosen